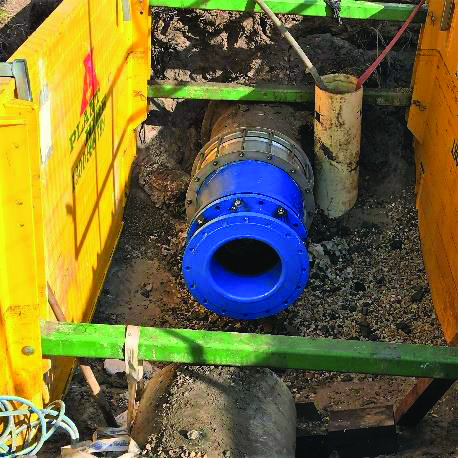 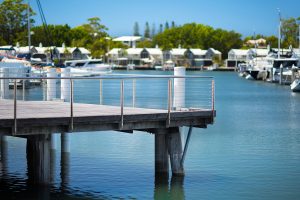 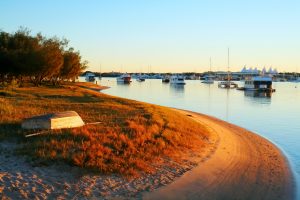 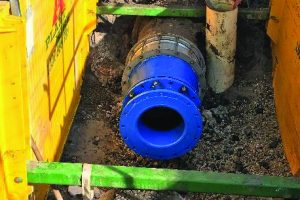 A failure in the City of Gold Coast’s DN600 Eastern Force Main was identified in November 2018. The main was immediately diverted, but this provided a short-term measure that was only suitable for dry weather; peak wet weather flows would overload the system. Identifying the exact point and mode of the fault was challenging, so the repair method needed to cater to a range of scenarios.

A flexible trenchless technology for the rehabilitation of pressure pipes was chosen to renew the main. This was the first time the technology had been used in the southern hemisphere, so it was necessary to specially procure the relevant materials and tools.

During the project, it was necessary to ensure safe pedestrian access and navigate a congested service corridor, particularly on the southern end. Adding to the complexity of the task, tidal conditions limited work to a three-hour window during low tide.

Interflow drew on its connections with Sydney Water and Queensland Urban Utilities (QUU) to procure the necessary materials and tools. Both Sydney Water and QUU agreed to support this emergency project by supplying these items subject to re-supply arrangements being met.

The City of Gold Coast’s DN600 Eastern Force Main is one of two large rising mains that takes sewage from about 200,000 people from the north of the city to the Coombabah Sewage Treatment Plant. The main is 18km long, 600mm in diameter and is constructed of mild steel and cement-lined main. It crosses beneath Biggera Creek, which is just upstream from one of the Gold Coast’s most popular marine recreational areas.

In November 2018, a break in the main was detected. Constructing a new sewer using horizontal directional drilling was deemed too time consuming, and slip lining was not suitable for the four 19-degree vertical bends and two 20-degree horizontal bends.

The City of Gold Coast elected to reline the existing main with kevlar-reinforced Primus Line pressure liner – a trenchless technology for the rehabilitation of pressure pipelines, which consists of a flexible, high-pressure liner and patented end fittings. Primus Line had not previously been used to renew a sewage rising main in the southern hemisphere.

Interflow and the City of Gold Coast worked with the NTS Group to complete all enabling and close-out activities.

Interflow completed the relining portion of the project in the three-hour, low-tide windows over three days. This resulted in the main being restored to service within two weeks of the initial failure, in time for the peak tourist season for the Gold Coast, with no environmental incidents or injuries. This cost-effective solution is expected to service the City of Gold Coast for 50 years.

Interflow is committed to offering customers optimum solutions of the highest value for infrastructure within the water sector.