The concrete siphon runs below Serpentine Creek in an agricultural area near Bendigo, Victoria. The deteriorated structure required renewal during a short annual maintenance shutdown period.

The project presented a number of challenges:

Firstly, it required Interflow to produce a 3m diameter pipe; the largest spiral wound pipe ever made in Australia.

Secondly, it called for an innovative method of making the spiral wound liner negotiate the sharp bends in the siphon.

In addition, the project had added complexities in that the liner had to be capable of being installed in a siphon: a circular pipe laid in a U-shape and featuring 15o inclines and two sharp bends that the entire project be completed within only six weeks. 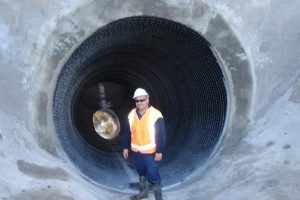 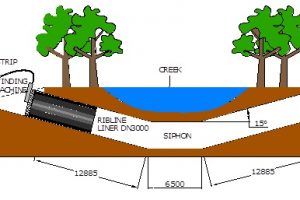 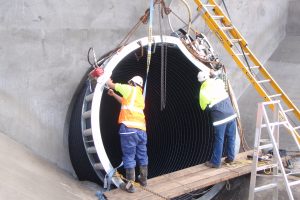 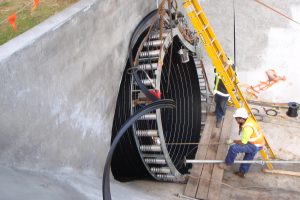 Before any work could commence on site a roller cage of 3,080mm internal diameter and associated installation equipment was designed, manufactured, and tested. This cage was used to produce the 3m liner and has the largest winding cage ever made.

A flexible SPR™ PE – Ribline profile was also specially designed and manufactured to enable the liner to pass through the abrupt 15o angle changes in the siphon.

At the start of the installation process the siphon was cleaned and all debris and silt removed from inside it. The next step was to setup the Ribline installation equipment including the roller cage at one end of the siphon. Due to the 15o incline of the siphon it was necessary to tilt the machine at the same angle so that the Ribline liner was produced parallel and concentric to the existing siphon.

To deal with the reverse angle changes in the siphon it was necessary to install the liner over a number of stages. This involved firstly producing an 11 metre length of pipe down the incline. The next step was to cut the spiral wound pipe at the winding machine and winch it around the bend, along the bottom of the siphon and up the other side. Then a second, nine metre section of pipe was spiral wound until it reached the end of the piece of pipe already in place. The two pieces were then extrusion-welded together. The winding machine was then setup on the other end of the siphon and the process was repeated. The two segments of pipe were welded together – producing a completely sealed liner.

The final stage involved sealing the ends of the liner and rendering them smooth with the siphon head walls. The annulus between the outside of the new SPR™ PE – Ribline pipe and the existing siphon was then grouted.

Interflow’s rapid response and ability to overcome these challenges meant that the client was able to have the asset renewed during the shutdown period and have the system back on line on schedule. This innovative trenchless solution preserved the local environment and was completed in a safe and cost effective way.
Interflow is committed to offering its customers optimum solutions of the highest value for pipeline rehabilitation.