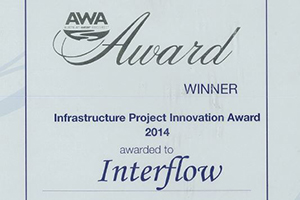 Interflow’s LAG Sewer Rehabilitation Project for Sydney Water, winner of the ISTT 2013 Project of the Year Award, has now received another Award, this time from the AWA.

Each year the Australian Water Association (AWA) presents its “Infrastructure Innovation Award” to showcase “significant and innovative infrastructure projects and initiatives within the water industry.”

In March 2014 the AWA presented the NSW Branch Award to Interflow for the “Rehabilitation of Sections of the Lidcombe, Auburn Granville (LAG) Sewer Mains Project.” The project is now the NSW nomination for the National Award

This is the second major Award for this project. Previously it received the International Society for Trenchless Technology’s Project of the Year Award against competition from around the world.

The Rehabilitation of Sections of Lidcombe, Auburn and Granville (LAG) sewer mains was one of the most complex and challenging pipeline rehabilitation projects carried out in Sydney Water’s history. 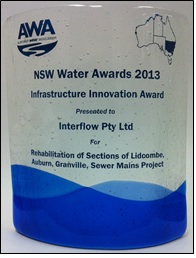 This project was to line some 1.2 kilometres of deteriorated 900mm diameter reinforced concrete pipeline. The challenges included:

Interflow completed this project using its Expanda Pipe and Rotaloc spiral wound liners, but needed to incorporate new developments to extend their capabilities. These included:

Completing the project while maintaining full sewer service required the construction of a complex bypassing system. This included a large pump-out pit, needed because of the 22 metre depth of the pipeline.