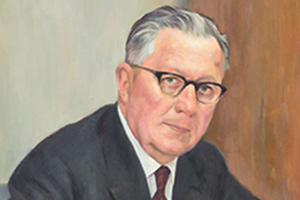 One of Australia’s most successful specialist civil engineering companies, Interflow, marked its 80th anniversary in business on 11th November 2016.

On the 11th November 1936, Harold Weaver, more commonly known as Bill Weaver, founded General Constructions with the first job being the construction of sewers in the Sydney suburb of Northbridge. The company went on to construct many of the original sewers and water supply pipelines throughout Australia.

General Constructions rapidly gained a reputation for quality and reliability under the watchful management of Bill, whose tenet was “that each project undertaken must add to the company’s reputation for competence, reliability and honesty”.

In 1960, Bill handed the reins of the company over to the second generation, appointing his son Ron Weaver as Managing Director. Over the years, Ron continued to lead the company always keeping one step ahead of the competition by providing innovative solutions to customers and by continually finding better ways to do the work. This attitude is deeply engrained in the culture of Interflow today.

In 1990, Geoff Weaver the founders Grandson was appointed Managing Director and in 1996 General Constructions merged with associated companies Vortec and Pipeline Rehabilitations to form what is now Interflow.

Interflow is a successful and innovative organisation that specialises in water infrastructure renewal and has a history of successful project and program delivery. Major water authorities trust in Interflow to lead their large sewer renewal contract programs. Interflow has become a world leader in a fast developing industry.

Since 1997, Interflow has received 18 prestigious national and international awards, most recently winning the CCF Earth Award(Vic) for Construction Excellence for the replacement of a St Kilda Road water main.

Says Geoff Weaver, “For 80 years Interflow has focused on solving clients’ problems – we become a trusted ‘partner’, we don’t compromise on quality or safety, that is something of which we are very proud”.

Interflow’s good reputation has been built on the company living and breathing its core values. They are simple: honesty, reliability, and competence. Simply put, the company strives to act and communicate in a way that’s sincere, truthful and straightforward.

“Our clients come to us to solve their problems because they know we have the expertise to offer cost effective, innovative and alternative solutions”. According to Geoff Weaver “As we look forward to the future, we will continue to challenge the status quo by having a ‘can do’ attitude to find a better way. That is how we will continue to look after our customers and be successful over the next 80 years”.